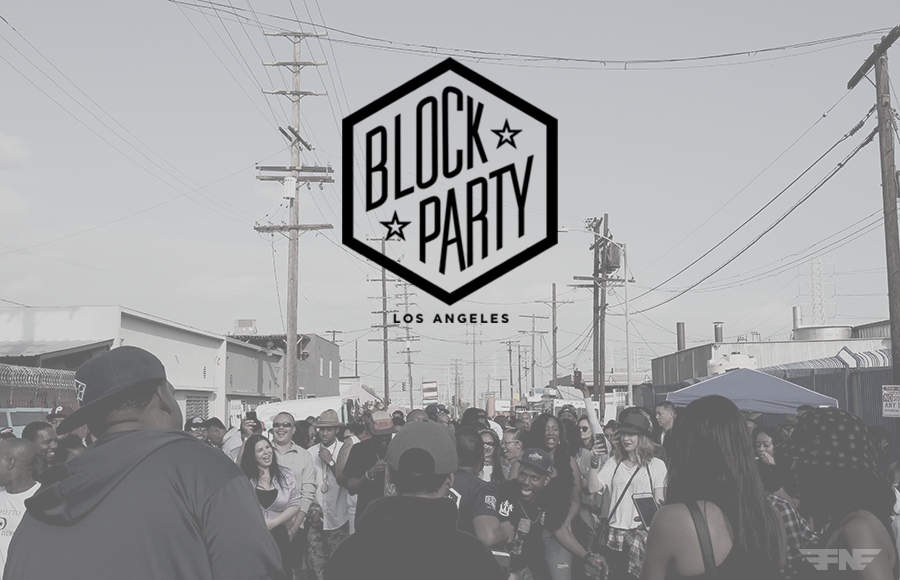 On May 9th, 2015, hundreds of Los Angelenos chilled, vibed, moved to the vibrant sounds and energies of Block Party LA 2015.

The show venue nestled itself within a side street between East Pico Blvd. and Grande Vista Ave. The main stage resided on the west side of the venue, and all along the street were assorted trucks, booths, and tents that vendored tasty food, fresh clothing, art, and fun tchotchkes.

The day’s weather included some lingering gray clouds that were later dispersed by the shining warm sun and a cheery blue sky. By the end of the show, it was a truly classic LA evening: orange sky, silhouetted palm trees and power lines, and the sound of energetic music from local talents.

The first act that I saw was Dean Risko, whose set consisted of energetic party tracks. He jokingly claimed that his entire career in hip-hop was directly inspired by Riff Raff’s music. Dean’s show was not confined to the Block Party’s stage; he leapt from those pastel heights to the asphalt below, still rapping, without dropping a bar. He ran through the crowd and completed the circuit by pouncing back on-stage.

The next act was Tassnata, who opened the whole set with an acapella 24-bar verse delineating his discovery of hip-hop and the voices and mics that inspired him. I distinctly remember that he “loves Hova, but chose ‘Ether.’” As a recovering Nas stan myself, this sonic preference struck a particularly personal chord. Tassnata’s energetic set was punctuated by the appearance of Toronto producer / MC Junia-T, whose presence on the microphone is truly inestimable. Junia-T supplied a classic Jamaican flavor to the Tassnata set, and the style of the two MCs meshed well together for a superior performance.

Next up was Alex Isley and her live band. As the Isley name might suggest, every track they played was about the transcendent powers of true love. The music was smooth, soulful. These easy-going, chilled-out, neo-soul rhythms of the band and Alex Isley served as a refreshing alternative to the trap drums, heavy basslines, and vigorous MCing that characterized the previous acts. On an off-topic note, the keyboardist for the band looked suspiciously similar to Isaiah Rashad, but of course, it wasn’t him.

Jake & Papa were on-stage next. A memorable segment from their set was the R. Kelly cover block: their covers included “Ignition (Remix)” and “Bump n Grind.” The threat of clothes being removed turned out to be an unfounded one, and the set stayed PG-rated. During the R. Kelly covers, the two artists picked a young woman out of the crowd to sing to, and it seemed like she was feeling the music along with the rest of the Block Party crowd.

Curtiss King arrived on-stage after Jake & Papa. He did three songs and then a surprise guest appeared: Top Dawg Entertainment MC Ab-Soul. With blunt in hand, Soul performed one track, and instructed the crowd to put three fingers in the air, hearkening back to the Kendrick Lamar / Ab-Soul “HiiiPower” movement in years past. This was pretty cool to see; I hadn’t even heard a “HiiiPower” call since 2011, back when Section.80 dropped.

The next act up was Overdoz. Some crowd members begged them to perform “Function,” which they amusingly refused to do. They continued and performed a handful of songs, including “Fuck Yo DJ” and “Don’t Want to Be Yo Girlfriend.” The whole Overdoz set was comprised of spacey but party-ready bangers and the energy never allayed.

The final act was Brooklyn MC Talib Kweli. During the set, he expounded on the troubling strife within contemporary race relations in America. He played a mix of older tracks from the Black Star days and newer ones as Talib Kweli, with a preference lent to the latter category. During a break in the music, Talib implored the crowd to continue to build themselves up and to take pride in their being as people. He named hip-hop culture as a unifier rather than a divider.

Overall, Talib’s set was a fitting closer to the positivity and the good energy being driven by the day’s music. Once Talib’s music echoed out towards the LA skyline, the Block Party was brought to a close.

It was truly an event intended for the community. The block party that day sought to recapture the classic vibe of where hip-hop was born: a group of diverse people convening together and enjoying the music being played throughout the community’s boulevards, avenues, and side streets.

DJ R-Tistic manned the ones and twos for the entire event. Between sets, he played snippets of classic tracks like “Oh Boy,” “U Don’t Know,” and “What Up Gangsta,” with newer tracks such as “U Guessed It,” “No Type,” and “My Nigga” being mixed in as well.

A host MC named Butta kept the crowd informed on what was happening between acts, and interacted with the crowd by staging impromptu dance circles.

When the dancing was getting “too weak,” Butta humorously implored the crowd to “stop acting lightskinned” and get down. One of the more memorable Butta segments was when he asked which neighborhoods and cities came out for the Block Party. Apparently, Compton and Watts were not in the house, while Inglewood enjoyed some representation. Long Beach was in attendance too. Most importantly, everyone had gathered together and became unified through hip-hop music and culture.

A portion of the proceeds for Block Party LA 2015 were donated to a scholarship foundation for the Children’s Defense Fund named “Beat the Odds.”

The Block Party LA event is expected to return in 2016.

Drake – Go Out Tonight x On A Wave