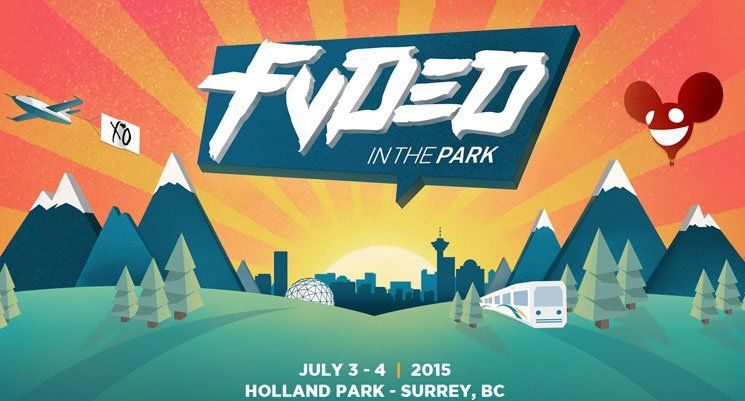 Summer is finally here and we we’re lucky to kick it off with the third annual FVDED in the park. For two days thousands packed into Surrey’s backyard and experienced one of the best music lineups we’ve seen in awhile. With perfect skies and Holland Park as our backdrop many got what the doctor ordered; a kiss of sun and an eargasm full of music for 2 days.
There we’re two stages; the Northwest stage and the Pacific stage. Thankfully we hit up information to find out when each act was set to perform as there was no way to find out who was next on what stage otherwise.

Gettin it started at the Northwest Stage
DAY 1:  Each stage had it’s fill of ear worthy acts which all lead to our very own Canadian, Deadmau5 . The supporting line up featured Tyler the Creator, who was losing his voice. Before he started his set he made sure everyone was well aware that this was his last show and he had no voice. Perhaps so social media wouldn’t start chipping away at his vocal performance, or lack there of.  Tyler did make up for his lack of voice with his comedic personality with a “I’ll show you mine if you show me yours” and his off the wall performance. He performed many of his hits like “Orange Juice”, “IFHY”, “Yonkers” and “Bastard” which had the crowd hype.

Tyler the Creator
Chuckie, Tommy Kruise and Danny Brown killed the Pacific stage getting the crowd doing some cardio and on the flip side on the Northwest  stage Haywyre, Destructo, Claude Von Stroke and Pete Tong we’re doing the same damn thing, get the crowd all sweaty and having the time of their lives.  The biggest surprise for us was Flosstradamus, two Chi-town based DJs. They had that crowd going WILD! They flowed from song to song having the crowd grinding their teeth for more. If you’re a soundcloud buff check them out at wwww.soundcloud.com/flosstradamus.

Flosstradamus
And of course, all of this lead to Deadmau5. Now, from what we knew, he was a DJ who wore this heavy ass mouse head. Little did we know he would take the mouse head off and expose himself to the crowd. Our theory is “how do we even know if that is Deadmou5? He could be double booked and half way around the world”. After seeing him at FVDED we now know why he brings that EDM crowd in. From the synths to the stage production to the music, you can’t help but be transfixiated on him. Imagine thousands of hands in the air, people sardined in a crowd, jumping up and down sycronized to a dude on stage behind a DJ booth, not saying one word? that’s some shit. Every time the beat would drop and the bass  made the dirt floor rumble from underneath us because he is that powerful!

Deadmau5
DAY 2: As the doors opened there wasn’t a lot of people (just yet) probably because of the heat. By noon it had hit 81 degrees. Nevertheless the music was right there waiting for us to be consumed in it. This day had us going back and forth from each stage like two crazy ladies who we’re trying to find her cheating boyfriend.

Keys N Krates
On the Northwest stage, DJ Flipout started it off right. Flipout is one of the staple DJs in Vancouver. Radio personality, DJ, Bboy and actor, he is Vancouver. It was nice to hear him do his thing for a solid fifty minutes. We also heard a little from Botnek who was super dope. But most of our time at the start of the day was at the Pacific Stage. Toronto’s STWO was killing the early crowd. His seamless transitions from beat to beat made you feel like you were listening to one really long dope track. Keys N Krates also hit the stage! They are an electronic band from Toronto. This triad consists of a drummer Adam, David on the synth and keyboard and Jr. Flo on the ones and twos.  They work in the realm of house music to funk to hip hop beats. They are music, in all of its essence.

Vic Mensa
In the later half of the day, we got to see Ty Dolla $ign which was disappointing. Have you ever seen a rap artist lip sync? it was weird. For the most part he pulled a Britney Spears circa “Hit Me Baby One More Time (Live)”, with a lot of lip sync and a lot of “ooooo’s” in the mic just to try and trick the crowd into thinking he was up there actually performing. With disappointed long ass faces, we kicked it on over to Vic Mensa on the Northwest Stage, which was another highlight. We didn't think a lot of people would even know Vic, but hey, this kid is talented and the crowd he brought in was amazing. He performed everything from “Down on my luck” to “For the win” to “Daaaamn” and even did an ode to Wyclef in “Gone til’ November”. He was fun and gave tenfold back to the crowd (energy wise). After Vic we headed back to the Pacific stage  to see Afrojack who had the crowd going bananas. We thought it couldn’t get any crazier after Deadmau5 the night before but we we’re definitely wrong.

The Weeknd
After a long day, the night closed with TheWeekend. The crowd stood there in anticipation. Almost 20mins behind schedule he finally hit the stage and  the crowd started chanting his name. He gave them what their hearts desired, some good chilled music. With lighters and cell phones in the air he had everyone on their feet singing along to “Often”, “Crew Love”, “Love Me Harder”, “Wicked Games” and more. It was great way to end the two day music extravaganza.
All in all, FVDED in the park definitely out did their own festival from previous years. Three years in and they have continued to show that Vancouver IS a fun city and we can’t wait to see what Blueprint and Live Nation Canada has to offer the crowd next year.

Special Guest Contributor: Miss Liz
For more pictures and videos from FVDED 2015 check our Instagram @thaflynation
Related Topics:Interview
Up Next