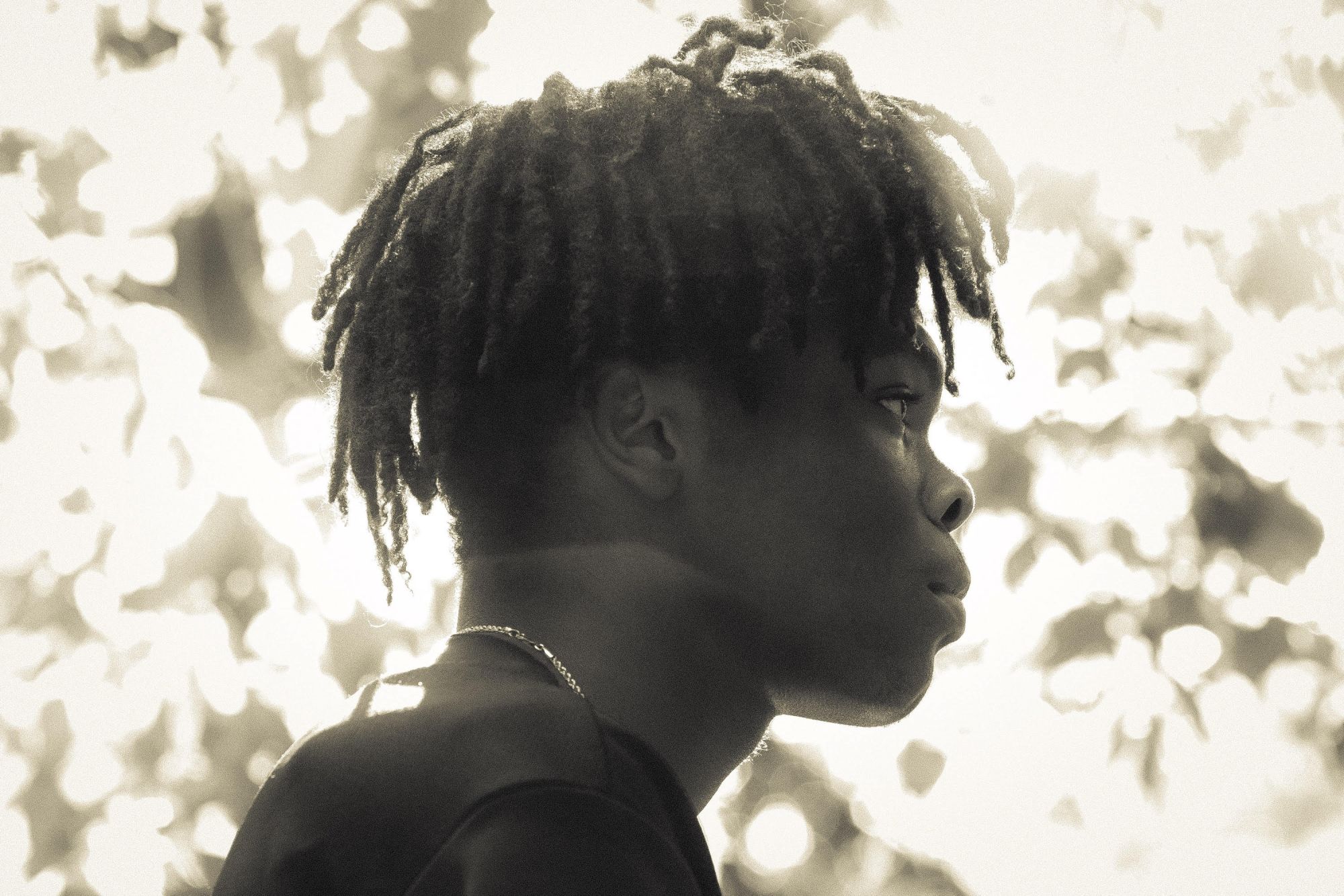 Last night (Dec. 5) Trapo performed his second New York headlining show at Rough Trade NYC as part of his Shade Trees Live mini tour. The stop served as the first time the 18 year-old Wisconsin rapper, sometimes singer, performed his debut album Shade Trees all the way through. His EPs SHE and Black Beverly Hills provided a great foundation for Shade Trees' release in November, as they attracted many listeners and set a bar for what to expect from the skilled spitter. Before hitting the stage opening acts Justin Rose, Jay Bel, and Rodney Tenor warmed up the crowd. Then Trapo took the stage and showed the audience why those shade trees of his won't be able to shield him from the spotlight. Check out our interview with Trapo below. We talk Shade Trees, what motivates him, and more.

TFN: You open your track “Love Is…” off Shade Trees with “Wait a minute what do you mean you care about anything I care about? What do you mean?” What are some of the things you care the most about?

TFN: In a recent interview you describe Shade Trees as being symbolic of where you see yourself in three years, chilling under a tree catching some shade. What do you envision your surroundings being in those moments? Will there be people around you?

Trapo: In those days I see myself in a house somewhere. Not in a crowded city or nothing, somewhere peaceful. I see myself with a wife, maybe a family, maybe some friends if they’re around me. I just see myself at peace. Not having to worry no more, or stress about recording an album. That’s what I love right now, but eventually I want to not to have to record anything, and be able to be peaceful under the shade trees.

TFN: One of your tracks on Shade Trees is “Youth,” how do you plan on spending your youth? Or do you have no plan at all?

Trapo: I don’t have a plan, I just know what I’m going to do is keep recording. Keep chasing my dreams. That involves a lot of going place to place, so I guess my plan is to keep going place to place and doing what I love, which is music. That’s gonna be my youth.

TFN: You recently tweeted “Shouts out to Cole for telling the truth.” That’s obviously about “False Prophets” and “Everybody Dies.” What prompted you to tell the truth on “Average Freestyle?” Just one of a few tracks you dropped leading up to Shade Trees’ release.

Trapo: It's like certain rappers think that they can do their thing and it’s the best music out, the best shit out. And I feel like, like Cole felt he needed to drop a song to show other rappers that there’s higher rappers that they should respect in some type of regard. That’s what I was doing in my own city. I wanted to show people and other musicians the skill I had, the talent I had, and I felt I deserved to be the one to put on for my city. That’s what I was doing with “Average Freestyle.”

TFN: On “She Moved On” you say “I was alright before the feelings and the liquor came,” and on “Riot” featuring Saba you mention liquor too. I’m curious to know what’s your drink of choice?

Trapo: I don’t really have [one]. I could tell you a drink, like me and my friends being high, shit we buy from the store like Amsterdam, Apple Amsterdam. Just shit we seen at parties.

Trapo: I did it for this exact reason. I wanted to somebody to catch it, I wanted somebody to notice me using it twice, so that’s dope that you noticed that. Artists I look up to do that, they recycle their lines. And me being a fan of them I’m like, “Oh shit he used that in the last album.” That’s kind of why I did it, purposely, to see who really paying attention, like who was a fan before Shade Trees.

TFN: I understand that you were inspired to rap from seeing your uncles do so. Have they given you any feedback or thoughts on your projects thus far?

Trapo: Yeah my uncles, I see them every now and then commenting on my videos. They like what I’m doing, they haven’t given much advice ‘cause they figure I know what I’m doing. They support me still, they not rapping no more, but they like that I’m doing it. They here for me now.

TFN: “I’ve Been Working,” and “Stop Me” highlight your work ethic. How do you stay motivated?

Trapo: I just think about all the videos I’ve watched on the internet of performances and huge crowds. I know one day I want to be that guy performing in front of a huge crowd, that’s there for me, my fanbase. I’m motivated to grow a fanbase, make it grow bigger and bigger. I’m motivated to get out of my current living situation. I want to see the world, and I know to do all that I got to take music real serious. That’s my motivation, just seeing every thing I haven’t seen yet. I know it’s like a bunch of shit I need to see, I’m only 18 so I should be able to see that stuff. That’s my motivation really.

TFN: On “Oceans” you rap, “What you mean that you not gonna let me smash? I’m a rapper now, damn shorty. They pulling out they camera now, fan shorty.” Do you have any crazy fan stories yet?

Trapo: Not some like super crazy fan stories. But I do have people that run up to me, freakout a little bit, like “damn you’re right in front of me.” People in my city who know they can stumble across me one day because they know I live in Madison, but haven’t yet, and then they finally do. Those fans go crazy, but they don’t do like no wild wild stuff yet.

TFN: On “Beg” you say “What’s air if we cannot breathe,” has there ever been a moment where your breath has been taken away?

Trapo: I’m dating a girl right now, her name is Hanna. Before we met I was downtown going to another show and she was going to the exact show. Especially the album I was writing, my subtext was about to be called Meeting Mariah, Shade Trees-Meeting Mariah. So I was writing my music like me finding my dream girl. So I saw Hanna, obviously I was attracted. That counts as a moment because then I end up making an entire album shaped around that moment.

TFN: How does it feel now that you’ve dropped your first album?

Trapo: I feel relieved, because we’ve been working on it for so long. I’m glad to show the world how versatile I can be with my music. I’m excited. I’m happy people like it, I was worried that people would feel some type of way about it. But a lot of people enjoy it so that’s cool. It feels good to get it out, ‘cause now I could move on and put more music out.

Buy and bump Shade Trees in its entirety here. And be sure to follow him on Twitter.