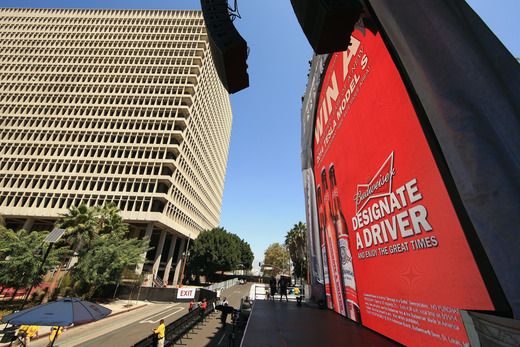 Following rumors and even one city councilman attempting to halt the process, Mr. Shawn Carter himself and Los Angeles Eric Garcetti officially announced in April that Made In America would make its way west Labor Day weekend. Running congruently with the east coast leg in Philadelphia, MIA LA didn’t reach the heights of its bi-coastal brother for several reasons. Outside of a strange city hall festival layout, an unfulfilling artist line-up felt lacked much inspiration despite heavyweight names. Despite issues, Made in America LA represents exactly the growth Downtown LA has needed since The Staples Center and L.A. Live came into existence almost decades ago.

Day one didn’t begin too well due in part to confusion on backpack rules prohibiting them; bazaar for a music festival of this magnitude. Then the late start delaying entry for almost an hour as the Broadway entrance line grew past several blocks. Not to forget the ridiculous food truck lines delivering almost an hour and a half waiting time and interrupting foot traffic flow.

Kicking off the festival was Hit-Boy and his HS87 crew. The rapper/producer went through some of his mixtape favorites and tracks from his upcoming We The Plug project at the Dylan Stage. During Hit-Boy’s set, the “Niggaz In Paris” producer had Rich Boy join him on stage for collaborations and everyone’s favorite. Yes, Rich Boy performed “Throw Some D’s” The Inland Empire-native even took time to speak with Tha Fly Nation after his set. Expect the video of that interview to be up sometime this week. Giving one of the best performance of the festival, YG also hit the Dylan Stage to run everything from early mixtape joints to tracks from his Def Jam debut My Krazy Life.

Of course, DJ Mustard took time to back his brother between sets at the MIA L.A. Skateboard Stage. Alongside bringing out R&B crooner Jeremiah, YG brought out steadily rising LA rapper RJ. Interestingly enough, RJ would make an appearance the following day during Nipsey Hussle’s set.

The main Marilyn stage utilized L.A.’s historic city hall building as a backdrop, Iggy Azalea performed a serviceable set focusing on her debut mixtape Ignorant Art and major label debut The New Classic. Rita Ora joined onstage for “Black Widow.” Like many performances from the Australia-native, watching her voice change from heavy Aussie accent to down-south slang is a show in itself.

Hitting the stage later on the night before headliner Imagine Dragons was the Top Dawg Entertainment family. Anyone who caught their set at last year’s Rock The Bells knew exactly what to expect besides the addition of Isaiah Rashad. That means that everything lead up to King Kendrick Lamar. Though good kid mAAD City makes two years next month, there’s a timeless feel. Compton’s own Lamar can perform the album in its entirety for the rest of his life and never release an album again comfortably.

Day two went a little smoother for everyone involved. That includes media, attendees, staff and everyone else in-between. TDE songstress and sole female SZA gave set that went with a few hiccups before things picked up. Rashad joined her on stage for tracks from her Z album.  The biggest surprise was Ab-Soul’s addition to the set to perform These Days opener “God’s Reign.” Before Rita Ora gave a set at the Marilyn stage, LA stoner kings Cypress Hill performed their greatest hits “Insane In The Brain” and “How I Could Just Kill A Man.”

Back at the Dylan stage, Nipsey’s set featured a slew of West Coast artist being put out on stage. Alongside RJ, Jay 305 was brought out to perform local LA hit “Youzza Flip.” One of the bigger performances of the day came from Chicago’s Chance The Rapper who straddled between both critically acclaimed 10 Days and Acid Rap. Compared to his Lalapalooza and Cochlea sets this year,  it was sort-of lacking. However, hearing “Pusha Man” live is always a thrill.

Then there was the last two headliners John Mayer and Kanye West. It’s estimated that 30,000 attendees came out that night and boy they feeling was there. Mayer delivered a set that proved exactly why he is one of the best blues and rock guitarist of contemporary American music; despite being sexist and racist. Moving like clockwork, West gave a performance on par with what he gave the previous night in Philly. Like any show given by the iconic rapper/producer, there were rants between his biggest hits. Before wrapping up, Yeezus classic “Blood On The Leaves” was performed an extra two times.

For the first go around, the road was bumpy for Made In America’s first trip to the City Of Angeles. However, watching Kanye perform with the tall city hall structure is a site to behold. By the times the crowd went their various ways home by Metro train, Uber, foot or car(parking was ridiculously expensive), it’s safe to say that the festival will be making its return next year.