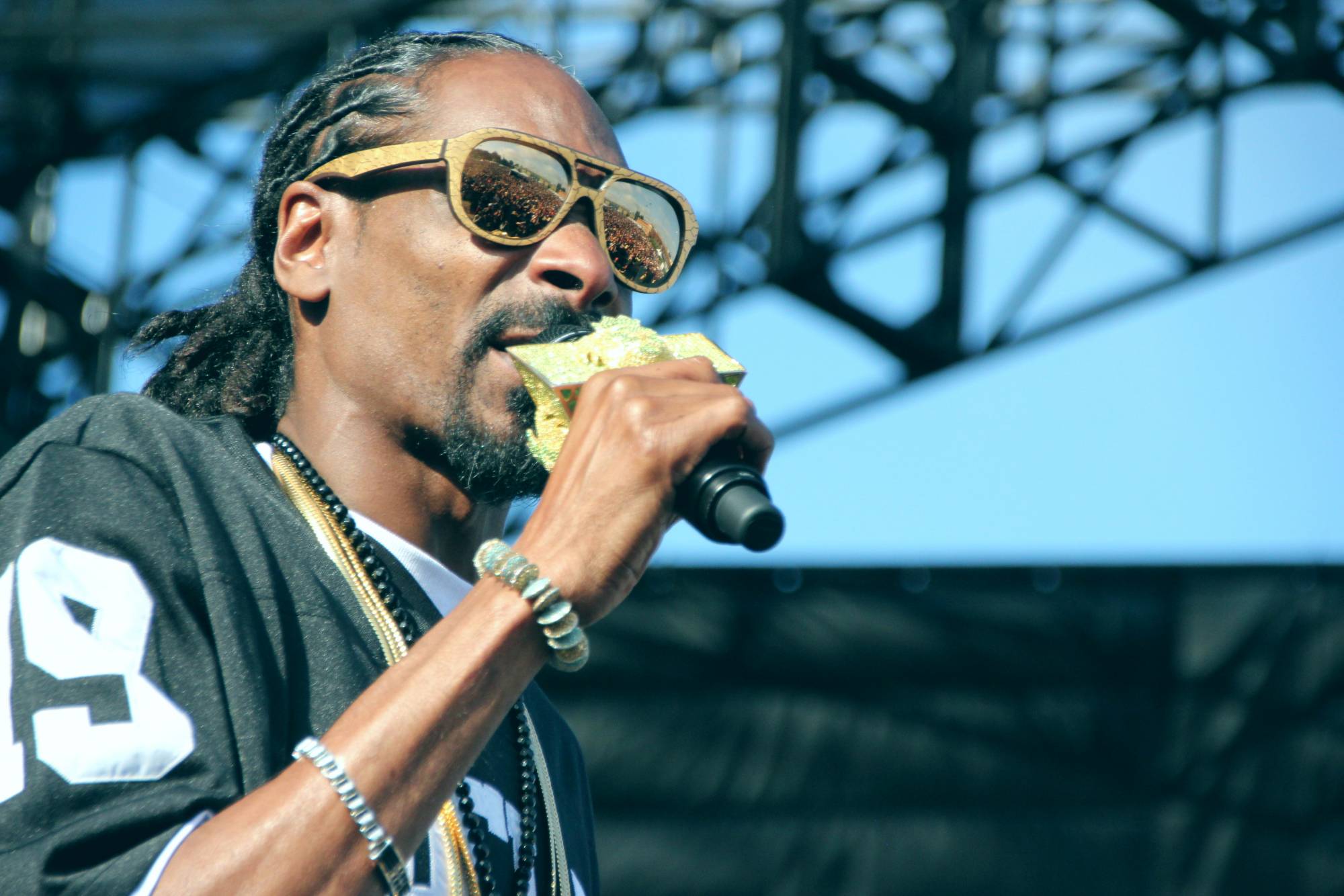 Positivity and mellow spirits filled UCLA’s intramural sports field for day one of this year’s UCLA Jazz/Reggae Fest Sunday. Most importantly, I enjoyed some quality hydroponics along with viewing some great performances from both veteran and emerging artist and before Snoop Dogg a.k.a. Lion a.k.a. Snoopzilla closed out the evening’s festivities.

A little more on that later however.

Running late, I made it just in time for Sarah Reich’s Tap Music Project featuring Lee How Nico Rubio. An interesting opening act, this may be the first time the festival may have featured a tap dancer backed by a full-on jazz band. Those out of the loop will know Reich as the biggest name in contemporary tap dance. My time in the photography pit was sort of short considering some amazing(in my head) shots taken fairly quickly. Spending some time wondering around the festival grounds, saw some great artwork from local artist besides the typical hippy vendors. Considering how low the funds were, I enjoyed free refreshments from the festival’s media tent and energy drinks from Monster.

Around the time Georgia Anne Muldrow graced the stage, bigger media outlets like Hip-Hop DX and Hail Mary Jane rolled in. Always good to get reacquainted with old associates and gain new ones, the crowd also began to build once Odd Future collective The Internet started their performance. Running through tracks from both their debut Purple Naked Ladies and last year’s amazing Feel Good, there were several interesting music covers peppered in. That meant making some also reductions of Jamiroquai classics “Too Young To Die” and “Mr. Moon” along with The Gap Band’s “Outstanding.” Those who have followed OF will understand their almost religious reverence for anything involving Pharrell and N.E.R.D. With that in mind, hearing Syd the Kid sing the opening lines of “Tape You” from In Search Off… just oozed with style.

Once The Internet were done, Syd and Matt Martians were doing interviews while keyboardist Patrick Paige and drummer Christopher A. Smith hung out. After each act finished performing, a step-and-repeat was available for  acts to take more photos and give one-on-one interviews. Deciding to bypass the influx of desperate writers and soak in the atmosphere, I just shoot the shit with Smith for a moment. Interestingly enough, I actually grew up with Smith in the same church were he played drums. Outside of reminiscing on our times at Harmony Missionary Baptist Church(the catalyst of my agnosticism) as the stage prepared for Aloe Blacc’s set, he managed to inform me that the group is already underway on their third album. Not revealing too much information, Smith told me that some of the stuff they have in store is “crazy.” Of course, everyone who’s preparing their new project gives that same answer. However, I’ll just take their word for it if they can manage to evolve from the awesomeness of Feel Good.

Spending some time with the Hail Mary Jane crew, I ended up chiefing with team after getting shots of Aloe Blacc’s performance(damn three song rule). Located with the rest of the festival goers near the field’s middle area, the smoking session lasted till the end of Blacc’s set time. Seems like Blacc had such a good time performing tracks Lift Your Spirits and everything during is Stones Throw era, he almost tried to go on longer.

High as giraffe pussy(word to Gucci Mane) from the generous supply of Skywalker OG, I waited patiently near the photographer pit to get a good spot for Snoop’s performance. Of course things were made difficult due to the enhanced security due to the Long Beach-native’s presence or the recent college shooting near University of California Santa Barbara. Then there were the annoyance of thirsty struggle rappers passing out their potentially sub-par mix-tapes. But who am I to shit on anyone’s dreams? The hustle is respected.

Once Snoop graced the stage all attention was on the D.O Double G. The former Death Row artist has evolved creatively and personally over the years; something this performance became a testament to. Spitting in that same California drawl which made him an international star outside of Hip-Hop, the Doggfather ran through his stable of classics and contemporary hits. That meant everything from “Gin and Juice” to his guest verse on Katy Perry’s “California Gurls” and everything else in-between. Filling his role as activist, he dove into an interesting spill on marijuana legalization before transitioning to “Young, Wild and Free” sans Wiz Khalifa. One of the editors from a publication(which will go unnamed) told me how much he wished Snoop didn’t rely so much on his “pop” stuff during his act. Understandable attitude, however, I don’t think the all-ages crowd would have had an appreciation for “Murder Was The Case” or “Aint No Fun.” Regardless, Snoop Lion delivered another solid set of material. Hell, there were times he stopped performing to jam along to House of Pain’s “Jump Around” and Joan Jett and the Blackheart’s “I Love Rock n’ Roll.”