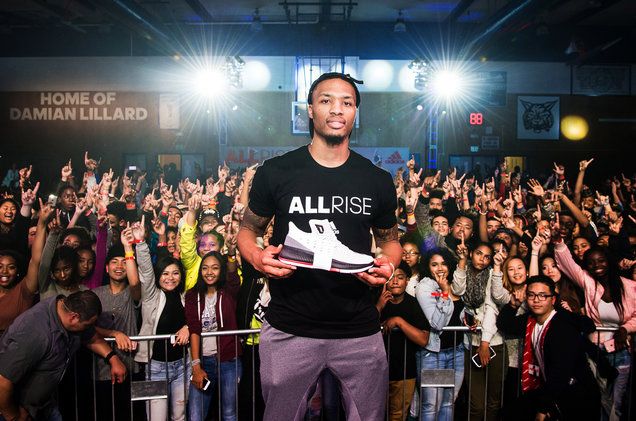 Adidas reported that during a sneaker launch for Portland Trail Blazer and rapper Damian Lillard (along with other guest stars including Fetty Wap) a full blown hip-hop concert erupted in the middle of the afternoon in a high school gym!

“This is beautiful,” said school district official John Sasaki, who spoke on behalf of Oakland High School. “Any time someone wants to help our kids here in Oakland, we're all about that.”

According to Lillard, the rapper thought it was a no-brainer to combine his launch of the Dame 3 at his teenage alma mater. Adidas was happy to oblige.

“They realize how much my roots and my upbringing mean to me,” Lillard told Billboard. In further collaboration, Adidas agreed to renovate the gym, weight room, and music studio of Oakland High School, which was Lillard’s third prep school and a place that had the biggest impact on the All Star. Lillard told Billboard that Oakland High School was where he turned a corner as he felt respected and cared about from his coaches.

As the students entered the gym this past Friday, there was already a stage and concert light rig set up on the basketball floor. Along with Lillard, the platinum-selling artist Fetty Wap and Lil Uzi Vert were also there. Needless to say, the students were already going insane.

“I've never seen a high school more light,” DJ Esco told Billboard. “That felt like we was at the Summer Sixteen concert with Drake or something.”

When Lillard made his way to the stage, he began to dance along to the music and let out a special announcement to the students saying, “I just want to let you guys know that I believe in y'all. I come from the same high school…and anything is possible. Y'all be responsible. Y'all represent the city the right way, the way I take pride in doing.”