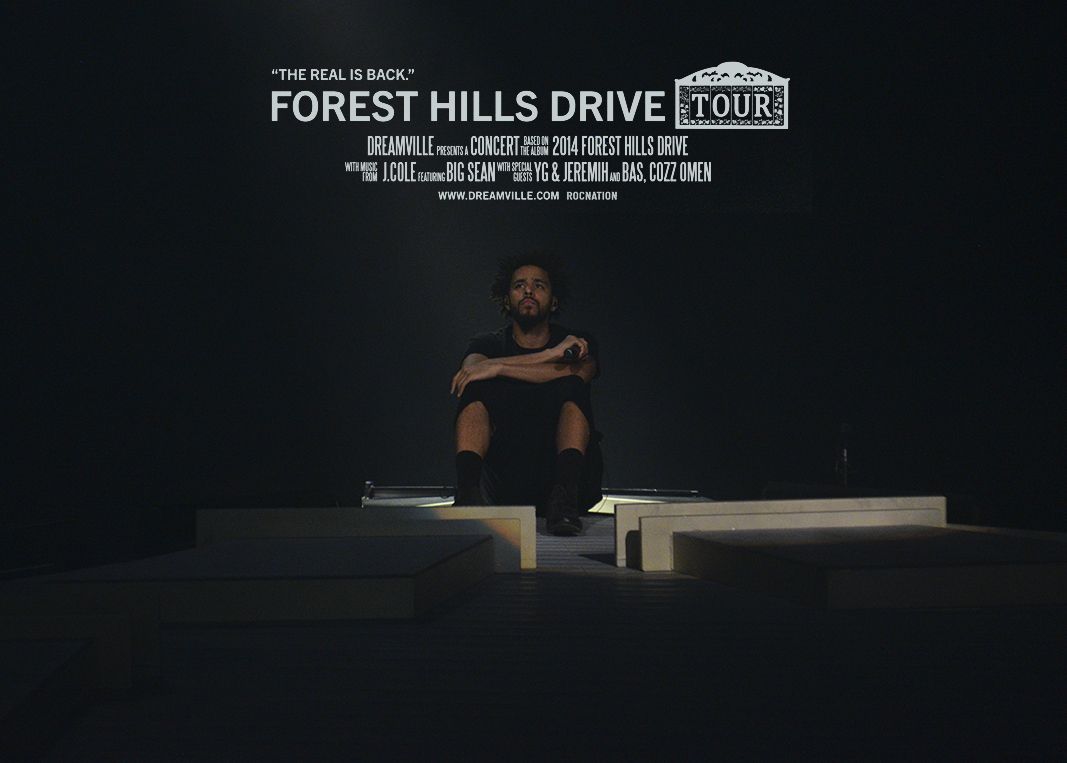 The burnt orange sun slowly fell beneath the horizon, and the balmy mid-July San Diego evening crackled with anticipation for the Forest Hills Drive Tour performances.

The Cricket Amphitheatre darkened stage invited a looming sense of Christ-like arrival. A neon sign read “Paradise Liquor.” The words betrayed more than just a promise of the after-life and holy spirits… it indicated the next performer: Big Sean.

Beneath and alongside the vibrant “Paradise Liquor” sign, LCD-illuminated Christian crosses adorned the store’s faux brick walls. Additional LCD screens served as the interior for the liquor store. There was an “hours of worship” schedule posted as well. Perhaps the “Paradise Liquor” store has a long-lost twin within the inner cities of Detroit, Michigan that only G.O.O.D. Music patronizes. A formidable cloud of sable fog loitered on the stage, as if awaiting its cue to disperse upon Sean’s imminent arrival.

Big Sean emerged atop the stage to the darkly twisting synth-horn sounds of “Paradise (Extended).” The Mike WiLL Made-It DJ drop garnered a respectable approval from the awaiting crowd, and the spotlights shined brightly upon Sean’s hooded visage. Sean’s opening hook of “I always wanted to stunt so hard, I always wanted to ride that whip” slithered out of the speakers, and the performance proper began. The energy emitted from Sean moved like a conflagration to the crowd below. With shining eyes and cheering voices, they welcomed Sean to San Diego.

Sean descended to the main stage for the first verse. His return to the front of the stage  had fans clamoring for more. Despite the track’s rapid-fire chopper flow, Sean catapulted about the stage, careening from there and back again. His palpable enthusiasm instilled the crowd with the turn-up they had been waiting for.

Additional cuts from Sean included “Mercy,” “Clique,” “Don’t Like,” “One Man Can Change the World,” “IDFWU,” and “Blessings.”

After his performance of “One Man Can Change the World,” Sean advised his fans to follow their dreams and to never give up in the face of ever-present adversity. Kanye co-signs notwithstanding, Sean imparted that his success was possible to be matched by anyone in that night’s crowd. Overall, Sean’s energetic and enthusiastic performance further primed the crowd for the arrival of headliner J. Cole.

Once again, the stage darkened and concealed itself behind a massive black curtain. Nike-adorned feet prowled about as the stage crew prepared J. Cole’s main stage design.

Eventually, the sounds of the 2014 Forest Hills Drive “Intro” emerged from the speakers. The curtain ascended, and there sat Cole himself, perched atop the exterior of his Forest Hills Drive home in Fayetteville, North Carolina. A single spotlight shined down upon him. Cole’s singing sounded pretty good within this live performance. I appreciated that he brought a live band with him too; the music on the Forest Hills Drive record deserved a live rendition for this tour. The band was mostly obscured behind a stage construction, so it was difficult to fully appreciate the visual mechanics of their musicianship.

In an effortless segue, Cole’s performance of “January 28th” made its arrival upon stage. Cole didn’t drop a single bar throughout each of the track’s three verses. The concluding bars of “but check the birthday, you ain’t the gawd, nigga” was enthusiastically completed by the crowd. To the melodies of “January 28th,” Cole confessed to the crowd his thanks for their support of the new album despite its lack of singles and radio promotion, and announced that he intended to perform the entire album right then and there. With “this next song is about my first time getting some pussy,” Cole embarked upon “Wet Dreamz.”

In the middle of the set, after “Fire Squad,” Cole took a break from 2014 Forest Hills Drive, and told the crowd that he was going to return to his mixtape days with “Lights Please.”

Within the interregnum of “Lights Please” and “St. Tropez,” Cole confessed that he wouldn’t be able to point to the actual St. Tropez on a map. He continued upon this tangent with an observation of how far hip-hop has taken him around the world, even though he started with absolutely nothing. Like Big Sean, Cole delivered a message to his fans here: that they should never give up despite whatever obstacles may appear.

With that, Cole brought it on home, performing the remaining tracks from his latest record. He didn’t perform “Note to Self,” however, but concluded the concert in a similar way to the record. Cole warned the crowd that money is not the solution to happiness, and that the path to true happiness is to “love yours” and chase dreams no matter the cost.

Cole’s performance of the 2014 Forest Hills Drive record illuminated this to me: his music, especially in a live setting, is far from the common complaints of “boring” and nap-inducing.

If y’all ever get the chance to see him perform live, definitely indulge in that opportunity.

Overall, Sean and Cole turned in fantastic performances that will no doubt delight the fans that attend the Forest Hills Drive tour.

Following the Dreamville crew and Jeremiah sets (in which we unfortunately did not catch in neither city) YG’s easy going stage presence and party going tracks surely had the GA area turned into a function. Compton’s Bomton’s own performed his new single “Twist My Fingaz” bringing an old school Cali vibe straight to Vegas. With the red 4 Hunnid flags waving high YG did his dance and began to dance (blood walk) in his Nike Cortez’s around the stage. Along with his new single YG performed his hits “My Niggas” and “Who Do You Love”, along with album favorites such as “Bompton”, “BPT”, “I Just Wana Party” and “Left Right”.

His high energy and stamina on stage had you forgetting he fell victim of a shooting a few weeks ago. Surely enough YG took time to address the issue. Stating “I thank Cole for fighting for my slot on tour” due to the shooting incident YG was no longer wanted on the tour he explained.  YG was a great transition between the acts and set the crowd’s vibe high for Big Sean to follow. It was great to see YG on a huge tour this year.

Near the end of J Cole’s set he introduced Jeremiah back on stage for “Planes”. The entire crowd was amazed in excitement with their lighters up and swaying to the slower melody.

[read-more “Check out the slideshow”]

Slideshow
Related Topics:
Up Next

CyHi The Prynce – Elephant In The Room