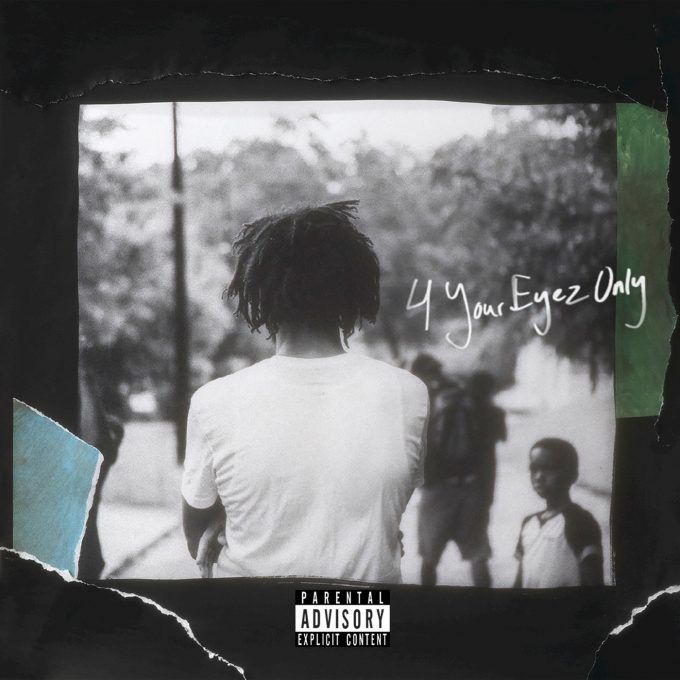 Two years ago today J. Cole dropped 2014 Forest Hills Drive, and today many are buzzing about Cole’s new project 4 Your Eyez Only. In my review of the former I stated that some didn’t see what the album’s theme was, so I explained. Unlike 2014 Forest Hills Drive, I wasn’t immediately able to spot the theme of 4 Your Eyez Only. However, I ultimately came to a conclusion, and like the last review I will explain what it is.

Cole opens up his 10-track effort with “To Whom The Bell Tolls.” The 2 minute cut seems to explore the grapples of anxiety, with the bell being a symbol of it. His raps on this one basically explore and question his existence.  The song didn’t hold much importance me at the beginning, however I later realized that a line on the track sets up the whole album. “I’m searching, and praying, and hoping for something. I know I’m gon see it, I know that it’s coming lord.” I’ll come back to its importance, I promise.

The horn-driven “To Whom The Bell Tolls” is followed by “Immortal,” which is ironically not something someone battling anxiety feels like. Cole gets slightly more aggressive with his delivery on “Immortal,” which seems to be an extension of his 2014 Forest Hills Drive cut “‘’03 Adolescence.” Except this time Cole mostly raps from his friend’s perspective instead of his. Cole’s bars create a vivid image of his friend trying to steer him away from the drug game by asking Cole provoking questions while detailing his dark and dreary lifestyle.

Next up is “Deja Vu.” Although it may give listeners “Dreams” vibes, this track seems to maintain his friend’s perspective as Cole raps about a girl that caught his homie’s eye. At one point spitting, “I catch your eye and look away as if it never happened.” Cole details his friend's initial hesitance, her man, and his desire for her despite her being taken. Throughout the track Cole returns to his point of view as he encourages his friend to go for it. Even though he sees himself as more than a small town guy he gives her his number anyway. Listeners may take “Deja Vu” as somewhat of a double entendre since the instrumental is reminiscent of Bryson Tiller’s “Exchange.”

The theme becomes even more clear on the fourth cut “Ville Mentality” as Cole continues to rap from his friend’s point of view. But he doesn’t seem to take it on until the second verse of the track. The first one finds Cole dropping bars about lack of privacy and transparency, and his need for isolation. Shortly before entering the second verse his friend’s daughter is heard on the track talking about her dad being set up and shot. Her testimony signifies a change to her father’s perspective on the second verse. With Cole spitting, “N***a play me never, give up my chain never, give up my pride never, show ‘em my pain never, dirt on my name never…” against a violin-backed instrumental. The track ends with the daughter saying “I wish my dad was here.”

The album takes listeners from a daughter longing to see her father to a man talking about the love of his life on “She's Mine Pt. 1.” It’s not clear if this track is solely from Cole’s perspective, but it’s possible. It’s also possible that Cole could be rapping from both their perspectives since his friend may have been in love with the women who bared his daughter. Cole discusses what this feeling of love feel while switching from first-person to third-person throughout.

“Change” brings us back to the first verse Cole’s vantage point, second verse his friend’s format. This time however there is more back and forth because there are more verses. Cole spits about better days and peace with a female vocalist backing him. The faith-infused verse is followed by what seem’s to be from his friend’s eyes at one point rapping, “N****s put three bullets in my car, won’t hit the gas tank. Know I got a angel cause I’m supposed to have a halo right now.” The third verse stay in his friend’s voice as Cole continues to rap about his lifestyle and faith. The next verse goes back to Cole as he details the night when someone got shot and hit the concrete. Cole then reveals that person was his friend James, who could be Cole's friend that I believe Cole's been rapping for since track one. Or at least the name of a person that his friend mourned during his life. The line, “I’m searching, and praying, and hoping for something. I know I’m gon see it, I know that it’s coming lord,” is from his friend . He’s the one who’s anxious, he’s the reason the instrumental sounds like a ticking clock, he felt his fate was inevitable. It turns out he was right.

“Neighbors” dives deeper into this concept as Cole raps about his friend's neighbors judging him for his occupation. He creates a vivid image of his friend moving to new neighborhood and the move’s circumstances. At the end of the track his friend decides to move back to the south side.

“Neighbors” is followed by “Foldin' Clothes,” which I interpreted in two ways. The first is obvious, Cole is rapping about his appreciation for his wife. The second is a little less obvious. The last part of the track switches back to his friend who discusses how his life is almost absent of all the nuances that make his life worthwhile.

For some, one of  the most worthwhile things they could do is become a parent, “She's mine Pt. 2” explores. The track brings back the subject of his friend’s daughter, while possibly introducing listeners to a little lady of his own. Since “She's Mine Pt. 1” is split up between Cole's and his friend's perspective, it's possible. (People didn't really stream Netflix while drinking almond milk in 2006 right?)

“4 Your Eyez Only” serves as the last track of the album and is a dedication to his friends daughter. The 8 minute track begins in the voice of Cole's friend  and ends in the voice of Cole as he reminds his friends daughter that although her father is gone he loves her so. This track reveals that the album is meant to let the daughter of Cole's friend hear her father's story.

For all those saying that Cole’s album is not what you expected of him, of course it isn't because the album isn't his. It's his friend’s. And before you comment that I'm biting off that person on Twitter, I peeped the concept before I knocked out last night. Sleep is important to me.